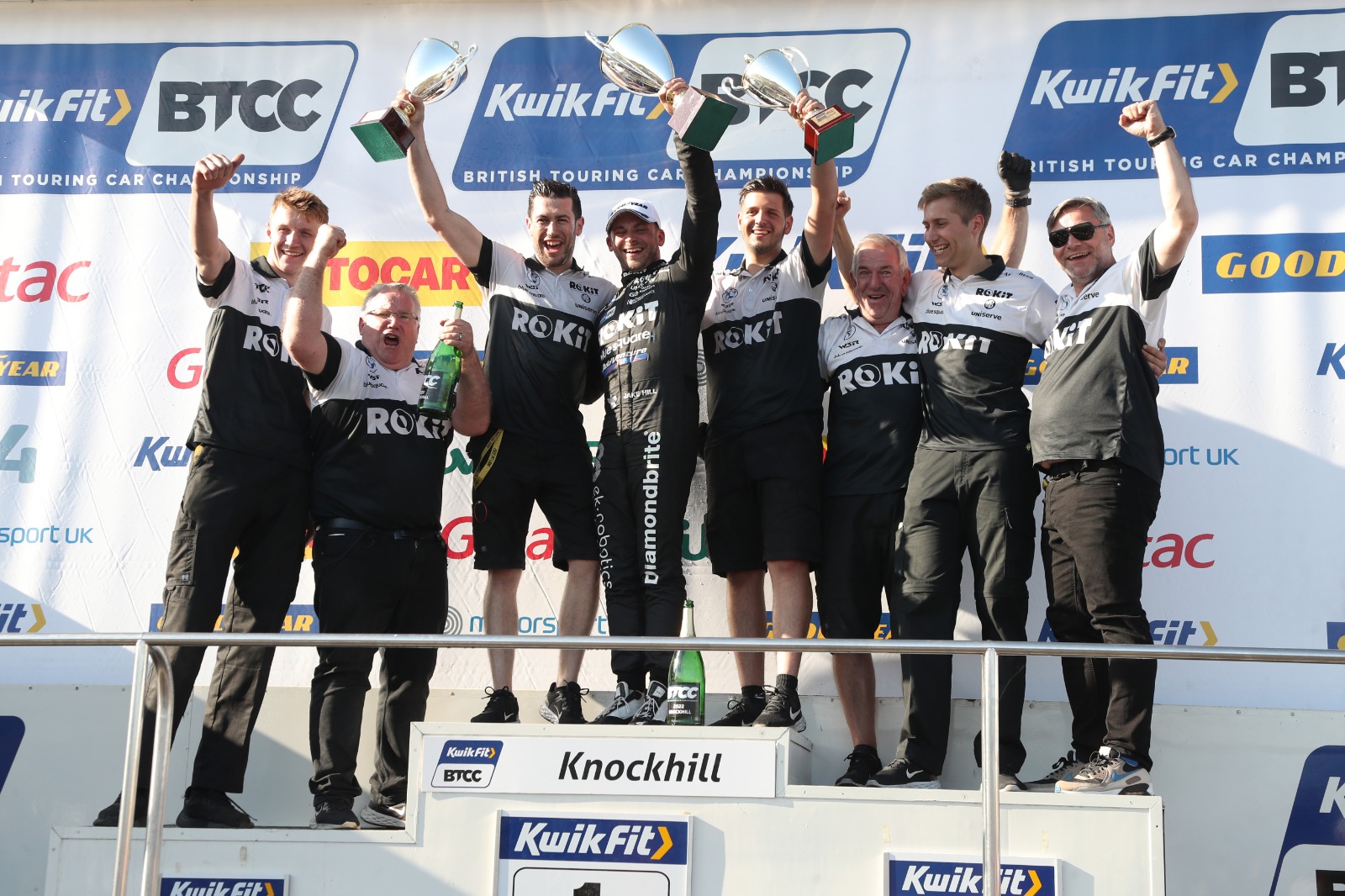 ROKiT MB Motorsport and Jake Hill claimed their second victory of the 2022 Kwik Fit British Touring Car Championship amongst a memorable weekend at Knockhill Circuit. Converting his pole position into victory in race one, Jake took to the podium in race two and race three to claim a mammoth 59 points from the weekend.

A super qualifying performance saw Jake line up for the first race of the day from pole position and he was pushed hard by reigning champion, Ash Sutton, in the early stages. Falling behind the Motorbase Performance car in the opening laps, Jake and the 'ROKiTship' stayed hot on the tail of the three-time champion.

As Jake's tyres came to life, the Kent-based driver continued to search for the opening to make a move. This appeared to come at turn one before a wide exit allowed Sutton  to regain the lead. This would only be temporary however, as just two laps later Jake expertly placed his #24 BMW 330e heading into turn one and made the move stick on the exit.

Upon hitting the front, Jake showed his true pace and pulled away from the field in a dominant performance to take his second victory of the season.

Warmer conditions greeted race two with the MB Motorsport man again lining up from pole position. Getting off the line well, Jake held onto his position in the opening laps before dropping a tyre into the gravel at the chicane allowed Sutton to take the lead.

The opening half of the race saw Sutton hold firm to keep Jake behind, but once again, the BMW 330e came to life in the second half of the race. Pushing hard to make a move, a slightly wide exit forced Jake into the gravel at the chicane which dropped him to P3 behind stablemate Colin Turkington.

This, again, would only be a temporary drop in the order as Jake found his way past Colin after he was forced to take the escape road. Running out of laps, Jake exerted more pressure on Sutton once more leading to a drag race to the line. Ultimately Jake would have to settle for second, crossing the line just 0.140 seconds behind Sutton.

After the reverse grid draw, Jake lined up for the final race of the day in P6. Keeping his nose clean off the line, Jake collected two places on the opening lap to run in P4 behind stablemate Turkington. Continuing to show excellent pace throughout, Jake pushed hard and in doing so lost a place to Ash Sutton only to regain it with an excellent move to regain P4 with over ten laps to run.

The MB Motorsport driver then zoned in on Turkington in front who was also closing in on Rory Butcher in P2. Setting the fastest lap of the race, Jake’s pace continued to light up the timesheets as he passed teammate Turkington and in no time at all had overtaken Butcher to sit in P2.

Finishing off the weekend showcasing the pace he had shown all weekend, Jake took the flag in P2 to cap off a memorable weekend - without doubt his, and the team’s most successful weekend within the BTCC.

A fantastic haul of 58 points collected through one victory, one pole position, two further visits to the podium and two fastest laps sees Jake make great progress in the Drivers’ Championship. Coming into the weekend, the Kent-based driver was 41 points off the top of the standings and leaves Scotland with that deficit narrowed to just fourteen points. This haul lifts Jake to fourth in the standings and with his eyes forward as the team heads to Snetterton in a fortnight’s time.

“I don’t know quite where to start after that! It’s the best weekend I’ve ever had in the BTCC and I owe so much to the whole team. The car has been fantastic all weekend, they’ve given me everything possible and I am so happy that I could make it count for them and everyone at ROKiT MB Motorsport. We’ve made a massive stride in the Championship but this has to set the standard now, we’ve got to keep pushing because it is all to play for.”

“I couldn’t be more proud of Jake and the whole team today. We’ve been threatening a dominant weekend for a while now but that is some performance. We have been saying all week that we have had some great memories at Knockhill but we’ve topped that here, this weekend. Huge credit must go to all the boys and girls at WSR who have worked tirelessly to give us a real ‘ROKiTship’ this weekend!”