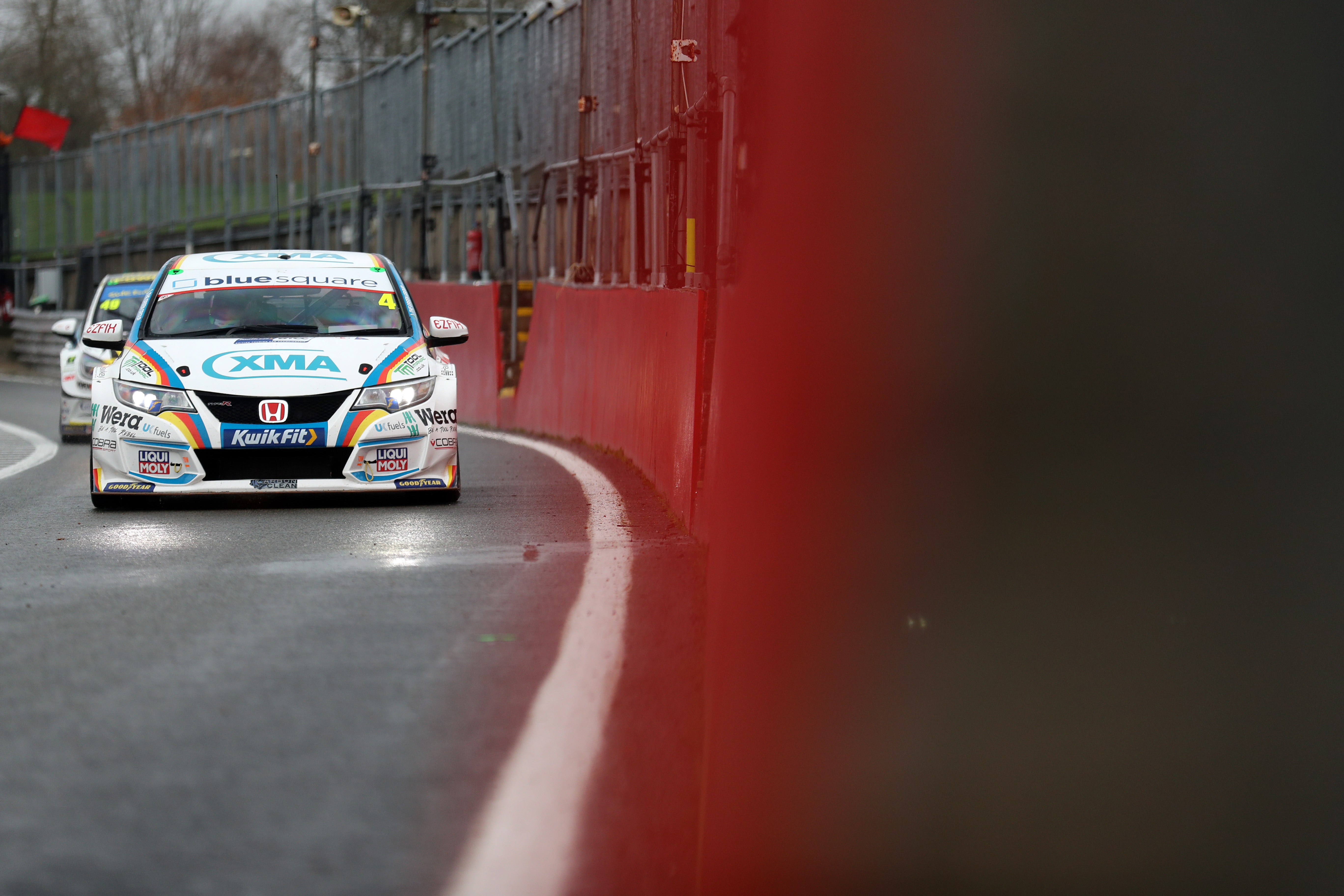 The MB Motorsport accelerated by Blue Square team set themselves up for a dramatic finish to their maiden Kwik Fit British Touring Car Championship campaign at their home circuit as Jake Hill qualified in P6 and Sam Osborne claimed a P21 starting position at Brands Hatch.‍

The team headed to the season finale weekend in confident mood, buoyed by three podium finishes across the past two events and their first Independent victory of the season last time out at Snetterton. This vein of form continued as Jake Hill closed out the day’s only practice session top of the timesheets, the fifth time this season that the BRDC Superstar had topped a practice session.

With wet and greasy conditions greeting the drivers on the Indy circuit, Sam spent much of the session dicing for position with his fellow Jack Sears Trophy contenders and ended the session in P22.

As qualifying rolled around, hopes were high that Jake could convert his practice performance and claim his maiden BTCC pole position. With the rain continuing to fall, conditions were very difficult for the field with many competitors falling victim to the treacherous conditions. At the halfway point, Jake found himself in P3 and Sam in P16 as they both sought to make those final gains.

Unfortunately for Jake, he pushed even harder trying to force himself up the order once more before the tyres had come to life and found himself in the gravel at Paddock Hill Bend. Causing a red flag, Jake was forced to watch the remaining ten minutes of the session and hope that he could retain his record of qualifying inside the top ten at every single round this season.

Typically, the rain then stopped falling as the times started to drop. Although many of the title contenders climbed the order, Jake held onto P6 which was enough to give him a fourth-placed finish in the Goodyear Wingfoot Award for the 2020 season.

With the Jack Sears Trophy firmly on his mind, Sam continued to vie for position with fellow contenders, Carl Boardley and Michael Crees. Ultimately closing the session in P21, Sam will start sandwiched between Carl and Michael with everything still to play for.

Elsewhere, there were celebrations aplenty for Official Development Driver, Esmee Hawkey, who deservedly claimed the Porsche Carrera Cup GB Pro-Am Championship after taking yet another class podium. The achievement marks a fantastic season for the young driver who can take to the track for her final race of the season tomorrow with the title already in the bag.‍

“It’s a case of what might have been as I think we all feel we had the pace for pole and that there were a few more tenths in it for Sam as well. The positive though is that both guys are well and truly in the mix for their respective goals. The final day always brings plenty of twists and turns and we are hoping that they can fall in our favour. We all want to send our congratulations to Esmee too who has been the class of her field this year and really deserves her title as she has developed so much as a driver this year.”‍

“Jake has been faultless all year in qualifying and I don’t mind seeing a driver pushing it to the limit, so today is just one of those things. It shows how strong he is at the moment that even after his best time being taken away, he still finds himself in and amongst it for tomorrow. For Sam, he knows it is all about consistency tomorrow. If he can move forward and take home three finishes, then we could be in for a really exciting finale. Elsewhere, Esmee has enjoyed a fantastic year behind the wheel and really deserves all the plaudits that she’ll get after her title win.”‍

“There aren’t too many times that you are disappointed with a P6 qualifying result in Touring Cars so that’s a measure of how strong we have finished the year. I’m annoyed that we couldn’t make it stick as I felt pole was there for us but we know we can make something happen from there and we have nothing to lose. There’s only one thing on my mind and I’m going to be giving it everything to see if we can find that elusive first win of the season.”‍

“They were pretty tricky conditions out there today so it was always a case of trying to find that grip wherever you could. We have knitted together the second sector pretty strongly and we know where we need to make our gains in sector one tomorrow. If we can piece it all together tomorrow and make some moves forward, you just never know what could happen."