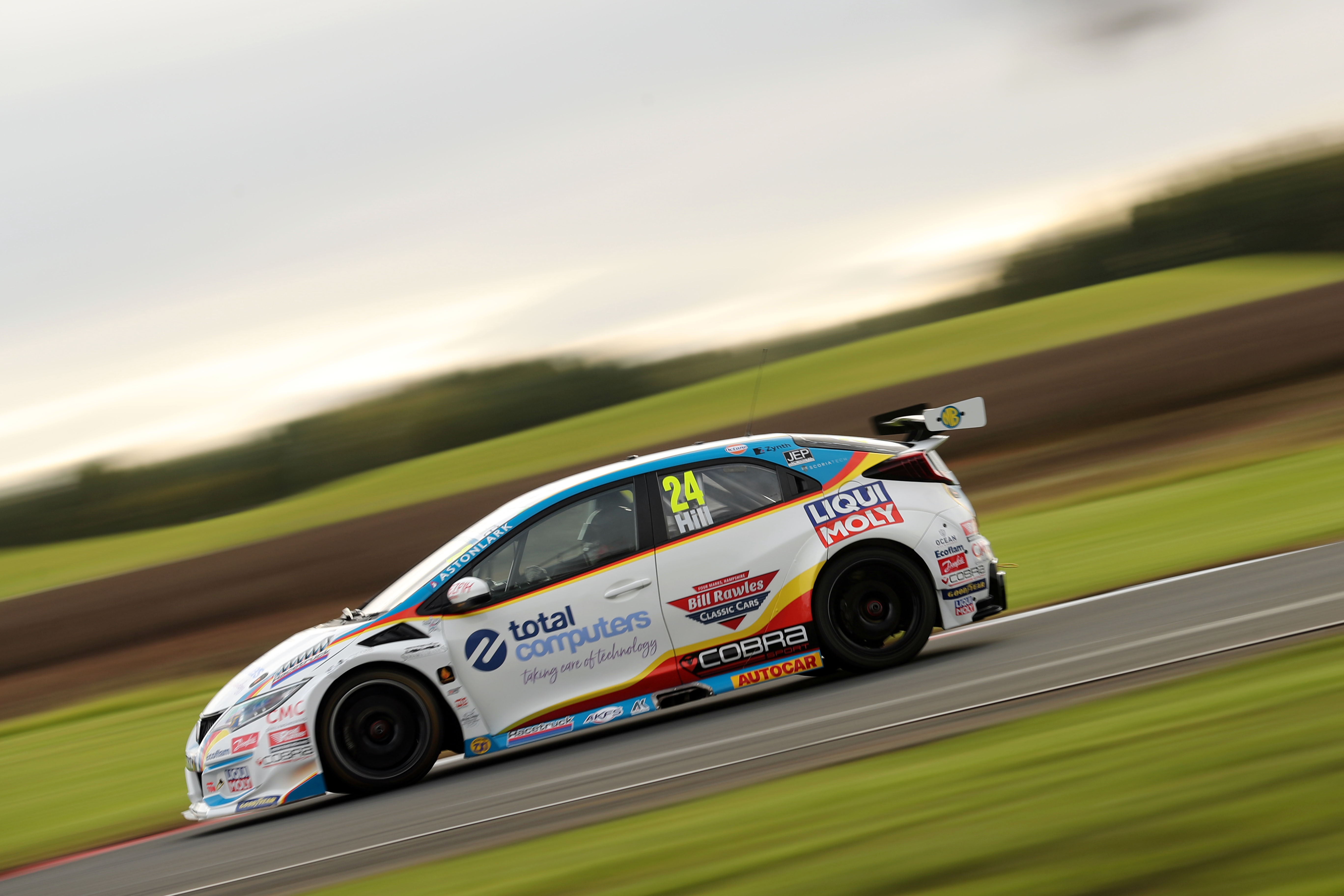 MB Motorsport accelerated by Blue Square will line up on the front row of the grid for the first race of the weekend at Croft after Jake Hill qualified in P2 at North Yorkshire circuit. Sam Osborne will start just outside of the points positions in P17 having moved forward throughout Saturday at the 2.13-mile circuit.

Heading North for the seventh round of the season, the MB Motorsport accelerated by Blue Square outfit took to the track sporting a new Total Computers-inspired livery thanks to the team’s channel partner activation with HP and Intel.

Buoyed by a positive outing at Silverstone last time out, the team started in positive fashion with Jake quickly getting to grips with the cold track sitting at the top of the timesheets in the early part of the weekend’s first practice session. As the forty-minute session elapsed, Jake closed the session out in P5 while Sam was in P22 as he built up his experience around Croft Circuit.

Continuing his front-running form, Jake claimed P3 in the second session of the day as the rain stayed away as the team made hay in the dry running. Sam’s eyes were focused on pushing forward in qualifying after closing out the morning in P24.

A frenetic qualifying was to follow with heavy rain falling just as the field was getting set to head to the track. Although the rain began to ease off before departing completely, the grid was confronted by difficult conditions as shown by multiple red flags temporarily halting the session.

Continuing where he’d left off in the morning Jake climbed to the top of the timesheets in the early stages of the session. After the second red flag and with just ten minutes remaining, the lap times across the field began to fall. Unfortunately, Jake was unable to improve his time due to an earlier off as he took evasive action which left him down on wet tyres. Although he would end up fourth on the road, post-qualifying scrutineering would see the Kent-based driver claim his second front-row start of the season.

Sam meanwhile demonstrated a clear jump in the right direction lapping consistently in the top-twenty for the majority of the session. With the midfield battle incredibly tight, Sam would finish the qualifying session nineteenth on the road before being promoted to P17 after the scrutineering process.

Shaun Hollamby, Team Principal, MB Motorsport accelerated by Blue Square:
“It’s been a very positive day here at Croft for the team. We’ve shown we have got a quick car in the dry and in the wet which bodes well for tomorrow. Jake’s got a clear goal in mind for tomorrow and we’ll be giving it everything to give him all he needs tomorrow. Sam was disappointed with the day’s practice sessions but has stepped forward in qualifying and has his eyes forward heading into tomorrow.”

Mark Blundell, Sporting Director, MB Motorsport accelerated by Blue Square:
“Those conditions in qualifying always throw things up in the air somewhat so we should be really pleased with today. With Jake on the front row and Sam fourth, in terms of the Jack Sears order, both our guys have the potential to have really memorable days tomorrow and that is what all our focus is on.”

Jake Hill, #24 MB Motorsport accelerated by Blue Square:
“It has been a mega day here and the guys and girls have given me a great car to drive all-day - both in the dry and the wet. Qualifying was probably one of the most eventful sessions I have ever been involved in and we got caught up in it a little bit too! We have been pretty much at the front all day today, so we’ll be giving it everything for that to be the case tomorrow too.”

Sam Osborne, #4 MB Motorsport accelerated by Blue Square:
“Things have turned out okay for us after a difficult start to the day. I’ve not had much running around here but I was a little disappointed with the way things panned out in the morning. We’ve taken a step forward this afternoon and are now in the mix. We’ve got to aim to move forward in race one and two tomorrow and aim to get ourselves in that all-important top twelve for race three.”