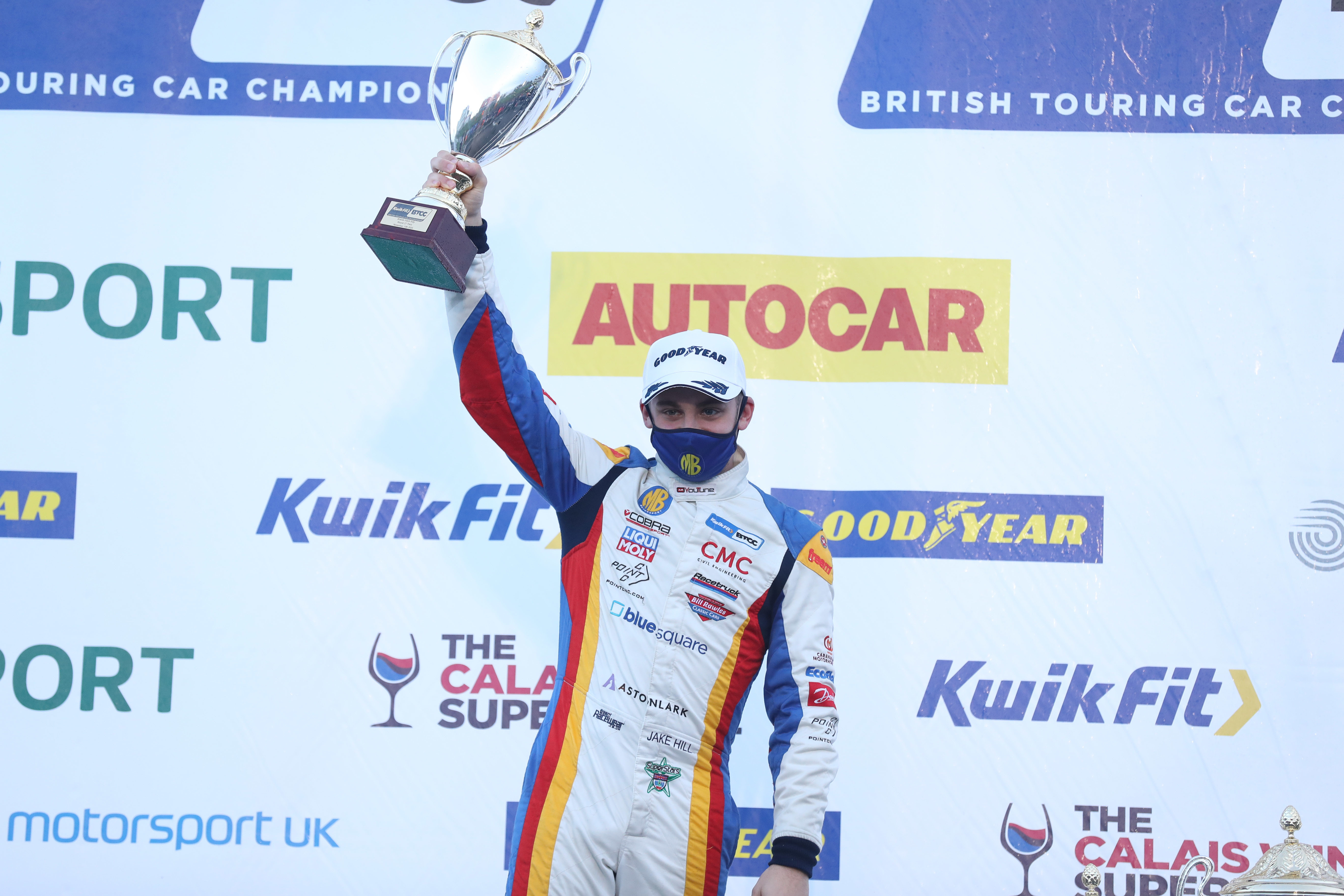 The MB Motorsport accelerated by Blue Square team enjoyed a strong end to its maiden season in the Kwik Fit British Touring Car Championship with a sixth podium of the year in the Brands Hatch finale.

The team headed into the weekend looking to maintain a strong run of form that had seen Jake Hill score three podium finishes in six races, and with team-mate Sam Osborne one of the drivers in contention for the Jack Sears Trophy title.

A challenging qualifying session in wet conditions saw Jake maintain his record of qualifying inside the top ten at every event as he secured sixth on the grid despite an off at Paddock Hill Bend, with Sam ending up in 21st place - and well placed amongst his Jack Sears Trophy rivals.

Heavy overnight rain and further morning showers meant track conditions were far from easy for the opening race of the weekend on Sunday morning, but Jake would enjoy a solid start to race day as he stayed out of trouble to bring the #24 Honda home to the flag in sixth place, having held off the challenge of former champion Matt Neal.

Sam had moved himself up into the top 20 in the opening laps, but his race would come to an early end when he got out of shape at Paddock Hill Bend on lap seven and was then hit by the VW of Glynn Geddie, resulting in him going off into the gravel trap at Druids and ending his Jack Sears Trophy hopes.

Race two would be held on a drying circuit and provided the chance for drivers to run on slick tyres, albeit on a track surface that was particularly greasy in the early stages and which played to the strengths of some runners who gambled on staying with wet rubber through the opening laps.

Jake would lose places on the first lap thanks to a trip through the gravel at Paddock Hill Bend after contact in the pack, which left him down in 19th place and with work to do in order to add to his points tally. However, he would excel in the tricky conditions and was the fastest driver on track on a number of occasions as he battled his way back up to seventh place at the finish.

Sam would also be in fine form in the #4 Honda as he recovered well from the disappointment of race one with a strong drive through the pack from 26th on the grid. Into the top 20 by the end of the third lap, Sam continued to make gradual progress up the order and having moved into the points scoring positions by two thirds distance, he crossed the line in a solid 14th place.

The reverse grid left Jake in sixth on the grid for race three, which would be held in wet conditions after the arrival of heavy rain just before the scheduled start.

Making up one place on the opening lap, Jake then took fourth on lap two when Chris Smiley ran off track and would run at the sharp end throughout as he diced for the podium places with Josh Cook, Tom Ingram and Dan Cammish.

The end result for Jake was a strong third place finish that made it six podium finishes for the season and allowed him to end the campaign in seventh place in the overall standings, and fifth in the Independents' Trophy.

Sam ran inside the points early on before being forced off track at Graham Hill Bend, which left him with dirty tyres and resulted in a spin as he then headed into Surtees, leaving him to retire to the pits with damage to the radiator.

Despite that disappointment, Sam ends the season inside the top 20 in the overall standings, 14th in the Independents' Trophy and fourth in the Jack Sears Trophy.

Shaun Hollamby, Team Principal, MB Motorsport accelerated by Blue Square:
“It’s great for us to end the season with another podium finish, and Jake has done a really good job again today to take three solid points finishes in difficult conditions. Sam also did a fantastic job in race two to come through the pack in the way he did, and it is unfortunate that he wasn't able to stay in contention for the Jack Sears Trophy as it would have been just reward for the progress he has made as a driver this season. Of course it would have been nice for us to get a win this year, but I feel we can be happy with the way our season has gone in very difficult circumstances with everything that is going on in the world. Everyone involved in the series deserves credit for going out and putting on a good show for our fans, sponsors and partners in recent months and we look forward to welcoming them all back trackside in the future."

Mark Blundell, Sporting Director, MB Motorsport accelerated by Blue Square:
“This has been a positive first season for MB Motorsport in the BTCC, and it is nice to end it with another podium finish. Jake has done a really good job again this weekend in the same way he has done all season, and to get a sixth podium of the year against such competition in those conditions is very pleasing. A top seven championship finish is also a job well done, and something to build on in 2021 as our partnership continues. Although it's a shame that Sam wasn't able to take the Jack Sears Trophy, he has come on leaps and bounds this season and is a totally different driver to the one who first got in the car when he joined us. He has worked well with Jake and has been eager to learn and improve, and I think that was shown with his performance in race two."

Jake Hill, #24 MB Motorsport accelerated by Blue Square:
“When we left Brands Hatch earlier in the year, I felt terrible as we'd had an awful weekend and it was the lowest I'd felt after a touring car meeting. Here we are now, six podiums later after a fantastic turnaround, and we can celebrate what has been a really good weekend to end the season. This is my home circuit and one that I absolutely love, and we've enjoyed a strong race day to be right up there in the top eight, scoring good points and picking up some more silverware. I have to say a huge thank you to the team for doing a fantastic job and I'm hugely excited for next year to see what we can achieve together."

Sam Osborne, #4 MB Motorsport accelerated by Blue Square:
“It's been an interesting weekend with the weather being the way it was, as I've not driven the car much in those conditions. In the opening race, things were going okay but then I made a small error at the top of Paddock Hill Bend and got out of shape. As I recovered, Glynn just seemed to move over into my car and we ended up in the gravel which was a shame, as it ended my Jack Sears Trophy hopes. Race two however was mega. We made a good call on the tyres and made up loads of places from the back and scored more points, which I didn't expect at the start. It's unfortunate that we didn't finish race three but I'm delighted with the season as a whole. When you look at the progress I've made from the end of last year to now, it's been huge and there are so many positives for me to take away from 2020. Huge thanks to the team and to Jake for helping to push me along, and this season is something for me to now build on going forwards."