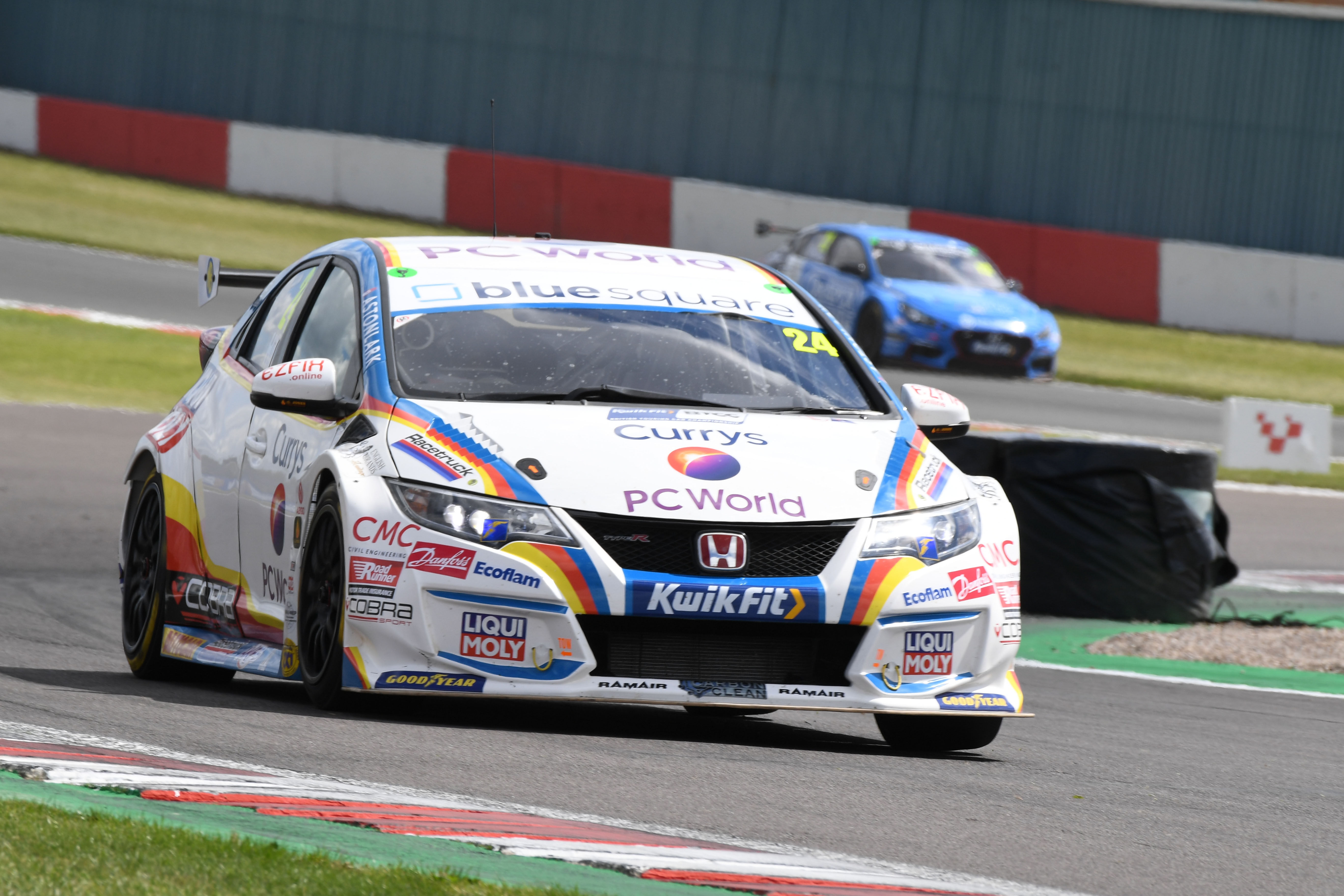 The MB Motorsport accelerated by Blue Square team got their season off to a positive start at the opening day of the British Touring Car Championship season at Donington Park. Jake Hill claimed a P7 starting position for tomorrow's opening race after a strong performance while Sam Osborne celebrated his career-best qualifying session as he lines up in P12 tomorrow.

After the longest of waits to make their competitive debut after the team's rebrand over the winter, MB Motorsport accelerated by Blue Square were revved up and ready to go as the season-opener kicked off at Donington Park.

With the sunshine beaming down, Jake and Sam started the morning in a positive fashion in the first free practice session of the day. Despite suffering from an electrical issue, Jake Hill still managed to place the #24 Honda Civic Type R in P8 while Sam Osborne ended up inside the top-twenty.

Sam continued to showcase his excellent progress by climbing up into P14 at the end of the second session of the day, while Jake Hill continued to battle with the earlier issues and had to settle for P12.

Picking their timing perfectly, the MB Motorsport outfit saved their best session of the day until last as qualifying rolled around. Building on all his work to date, Sam Osborne continued to turn heads spending most of the session inside the top-ten, ultimately closing out in P12 - a BTCC career-best performance. Continuing his excellent pre-season form, Jake Hill claimed a P7 starting position for the season-opener. While disappointed that a red flag took away his chances of moving up in the order, Jake is well-placed to take advantage of a top-ten start on Sunday.

Away from the BTCC events, there was another coup for the MB Motorsport accelerated by Blue Square as Esmee Hawkey also enjoyed a career-best qualifying performance in the Porsche Carrera Cup GB. A P2 finish will mean the team's Official Development Driver will line up on the front row for her own season-opener on Sunday.

"It's been a fantastic opening day for us all here at Donington Park. We are in the mix and in touch with those we want to be. Jake has continued to demonstrate that he can fight it out with the very best and he can certainly go racing from there tomorrow. I am really delighted for Sam and Esmee who deserve their results today. Sam has worked so hard to get to grips with the Honda Civic. If he can chip away tomorrow, we should be reflecting on a positive day all-round. We were all delighted for Esmee too and it was great to see the team support her at the end of the session."

"A big well done must go to everyone today. For our first day out, we should all be really pleased. Sam and Esmee have scaled new heights and Jake continues to show us why he is really one to watch this year. We need to keep our heads down, focus on ourselves and tomorrow could end up being a really positive one."

"That was a rapid session. To see the lap record falling throughout the day, the level of ability in the field is very high this year so I'm pleased with a P7 starting position for tomorrow. Of course, it was frustrating that the red flag curtailed our chances a little bit but we'd been a bit back and forth with a few issues throughout the day so to close out in the top-ten, I'm really happy with."

"That was good fun! It's been an amazing feeling to jump in the Honda Civic and feel at home right away. I'm setting myself really high targets but I've gone beyond them today. The team is excellent, the car is excellent and we've given ourselves a great opportunity for tomorrow. Now we have to keep our head down and see what progress we can make tomorrow."

“What a day! Our practice sessions went excellently yesterday but we've taken another step forward today. To take my first-ever front-row start in the Porsche Carrera Cup GB is a great moment but I've now got to focus on making things stick and doing my bit tomorrow. We've shown that our pace is right up there and now it's about delivering that consistently."