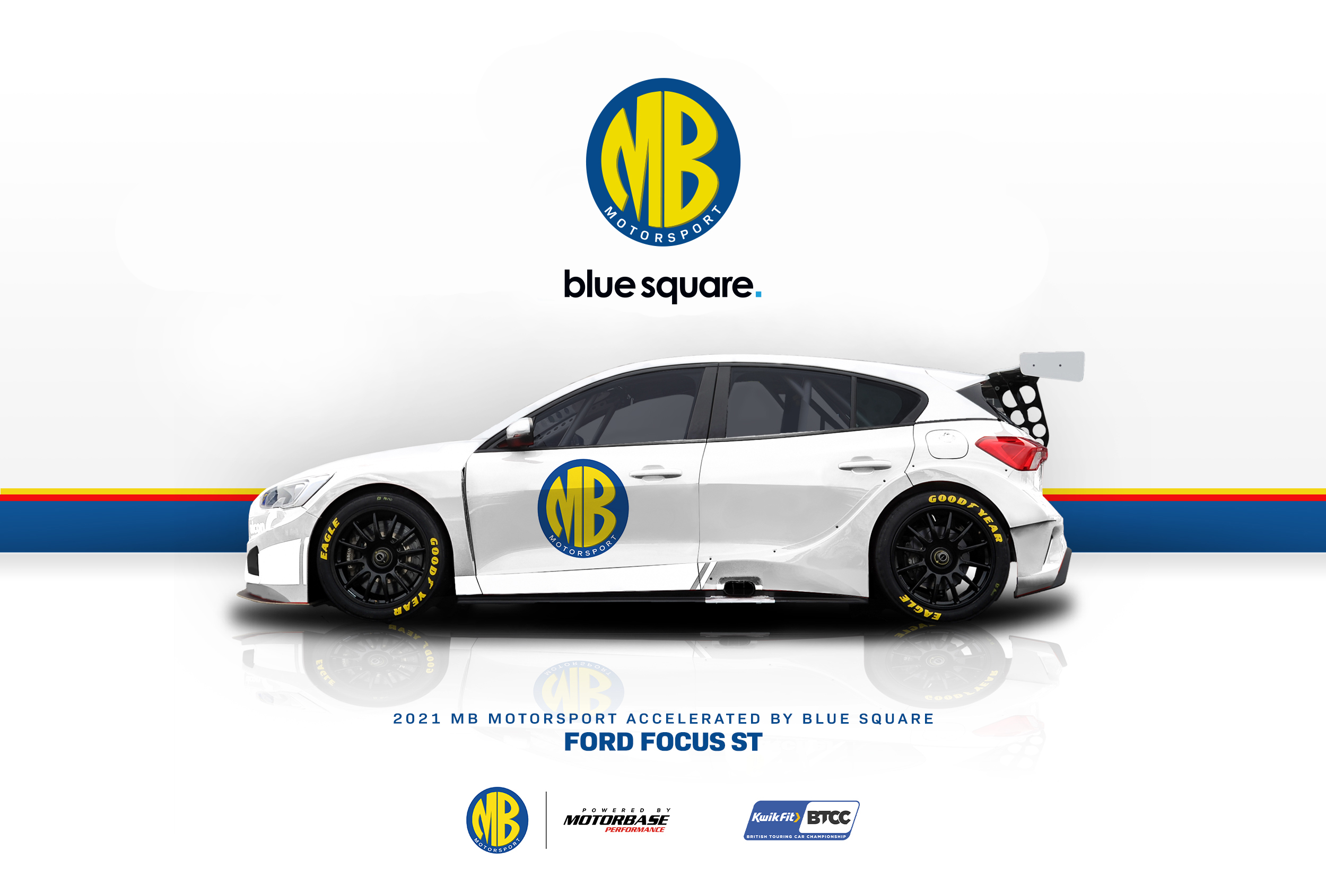 New Focus for MB Motorsport accelerated by Blue Square in 2021

MB Motorsport accelerated by Blue Square are delighted to announce new machinery will drive forward their assault on the 2021 British Touring Car Championship as the team make the transition to a pair of fourth-generation Ford Focus ST’s for their second season in the UK’s highest profile racing series.

Continuing Mark Blundell’s successful collaboration with Shaun Hollamby and Pete Osborne, the switch comes following news of the recent acquisition of Motorbase Performance by the pair and sees the team jump into race-winning machinery for 2021 which will be operated by the Kent-based squad. Shaun and Mark will continue to spearhead the team’s efforts remaining in their roles of Team Principal and Sporting Director respectively.

The news also sees the extension of MB Motorsport’s multi-faceted partnership with the award-winning retail marketing agency, Blue Square. Blue Square accelerated the team’s debut BTCC season in 2020 and return to the fore again this year as the team’s naming rights partner with many more exciting activations planned between the two organisations.

Blue Square branding will once again feature prominently on the team’s Ford Focus ST’s over the coming year, with plans coming together between the two organisations for an exciting full livery reveal in the coming months.

The team made an early move last year to re-sign the services of BRDC SuperStar Jake Hill who cannot wait to get behind the wheel of front-running machinery as he looks to continue his progression within the BTCC. The 25-year-old will be joined by a new teammate for the 2021 season as the team give their all to make a fully-fledged assault on the Championship.

Today’s news also means that is the end of the road for the FK2 Honda Civic Type R after a long-running and successful involvement in the Championship. Fittingly, the much-loved car was taken to the podium in its final outing as Jake Hill secured a P3 finish back at Brands Hatch Indy last November.

“Today’s news marks another exciting point in the team’s journey. We all loved our debut campaign in the series last year and are all united in wanting to achieve much more in the coming year. We have a fantastic relationship with Shaun and Pete and are delighted to be working with Motorbase Performance in the next step of our journey. The Honda Civic was a fantastic car and we all loved it fondly but everything has a lifespan in motorsport and we are firm in our belief that the Ford Focus ST is a huge step forward both in terms of outright pace but also with the introduction of Hybrid engines in 2022.

“Continuing our relationship with Blue Square as our title partners is another huge coup. Like ourselves at MB Motorsport, they are a hugely proactive and dynamic agency who deliver at the very highest level for their blue-chip clients. The sectors in which we both work are very complementary to each other and we look forward to strengthening that collaboration, opening up new opportunities and winning some races together in 2021!”

"Last year was Blue Square’s first time entering the motorsport arena and what a year it was! We’re so proud of what Jake, Sam, the crew and the whole MB Motorsport accelerated by Blue Square team achieved last season. Their desire to succeed only grew throughout the year, responding with incredible teamwork and positivity to every unexpected challenge, and I’m proud that Blue Square shares the same values.

“After talking to Mark, Shaun and the owners post-season to hear about their plans for 2021, renewing our partnership with the team for the new season was an easy decision. We’ve got some big motorsport fans here at the Blue Square Group too, so we know how excited the BTCC fanbase are for the first race! Here’s to a great 2021 for everyone involved.”

“It’s been really difficult to keep a lid on these plans as I’ve been pretty excited about letting the cat out of the bag! I was delighted when I heard everything had been brought together and I’d be behind the wheel of a Ford Focus this coming season. The Honda Civic was a big step forward for me and I loved every race in it but today’s announcement sees us as a team go to another level again and takes my ambitions for the season ahead to a new level as well.

“I’m also really delighted to be continuing our work with the Blue Square team too. Right at the start of 2020, I really enjoyed being a part of their kick-off event with their team and together we brought together some really cool virtual and digital activities last season. No doubt, we will be being just as innovative and creative this year alongside their clients and friends.”