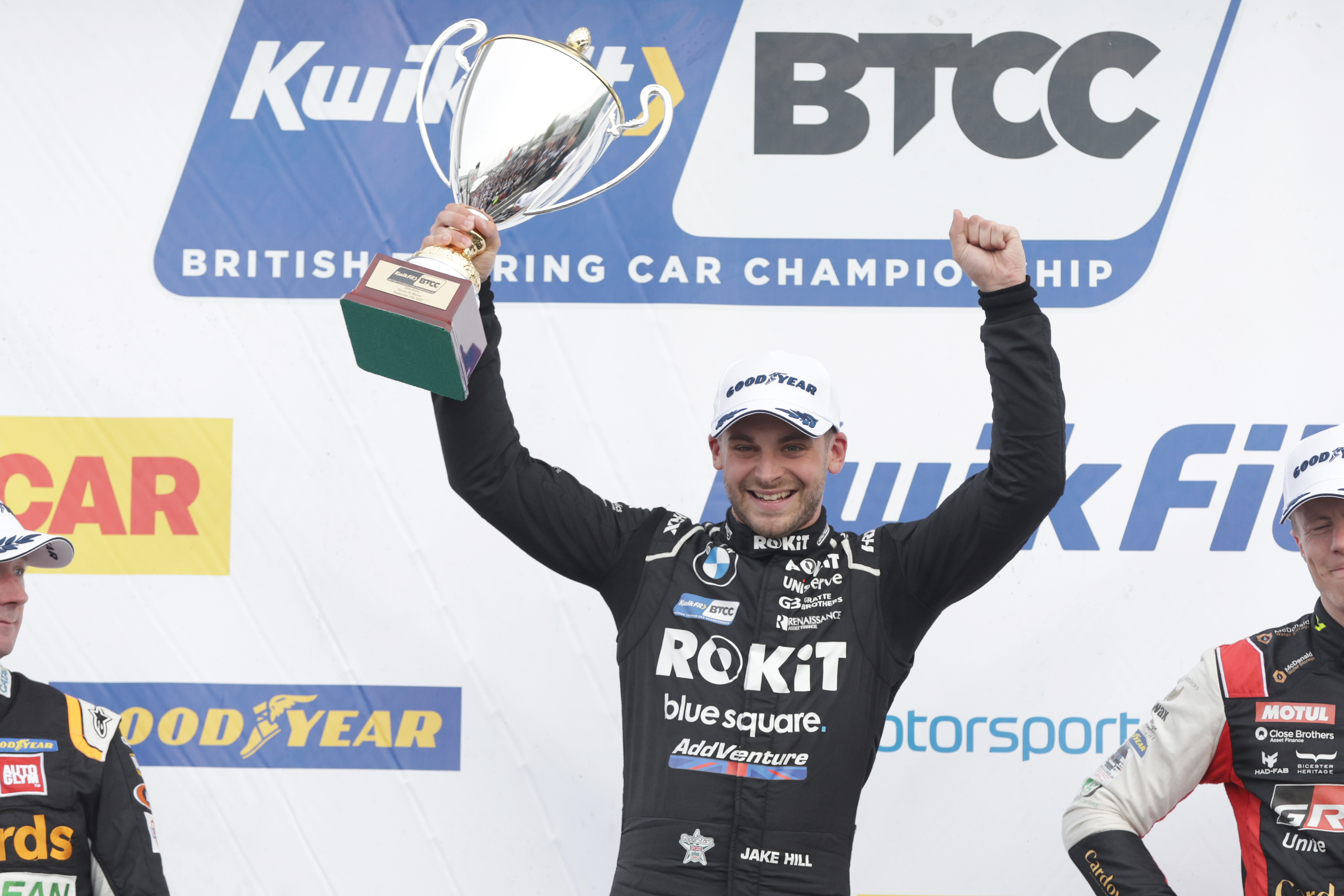 ROKiT MB Motorsport and Jake Hill returned to the top step of the Kwik Fit British Touring Car Championship podium with victory at Silverstone, as well as second and fourth place finishes to move to second in the Drivers' Championship - just five points off the lead with one round remaining.

Having collected the joint-most amount of points since the summer break heading to Silverstone, Jake Hill and the ROKiT MB Motorsport team were in high spirits as they headed for the Home of British Motorsport.

Kicking off the weekend with two practice sessions around the 1.64-mile, Jake finished the two sessions inside the top-ten - ending up in 10th and 5th place respectively.

Jake continued his fantastic qualifying form into Silverstone as he secured his sixth front row start of the 2022 season, qualifying in second place and just 0.037-seconds off pole position. Jake further cemented his position at the top of the Goodyear Wingfoot Award standings, for the fastest qualifier, and sits 15 points clear of WSR-stablemate Colin Turkington heading to the Brands Hatch finale.

Lining up on the front row for the first race of the day on Sunday, Jake initially lost ground to the pole-sitting Butcher and was coming under pressure from the trailing cars as he worked his tyres up to temperature in the opening laps. Keeping his second place with some great defensive driving, Jake then began cutting into Butcher's lead and was the fastest man on track when the safety car was brought out.

Staying hot on the rear of the leader, Jake was looking for a way past and into the lead but remained in second place at the chequered flag - crossing the line just two-tenths behind the race winner.

Keeping his foot in, Jake was able to get past Sutton for third place and a few laps later overtook Shedden for second place. Jake then passed Butcher at Luffield in what was described as ‘one of the moves of the season’ cutting back inside the Scotsman’s Toyota and out raking him into Copse to take the lead.

Jake then started to build a gap, but this was shortly reduced when the safety car was brought out. Jake then rocketed away on the restart and was able to reinstate his healthy gap at the front of the field.

Crossing the finishing line, Jake secured his third victory of the 2022 season and made Silverstone the first circuit for Jake to score multiple race victories at in his BTCC career.

Drawn an eighth place starting position for the final race of the day, Jake dropped back to 11th after heavy contact into Brooklands and somehow caught the resulting slide. However, Jake kept his cool and delivered one of his standout drives of the season.

Jake’s fight through the pack produced some of the most decisive overtakes of his season - slicing past Jackson at Copse, Chilton at Brooklands, and then repeating his move from earlier at Luffield - this time on Cook, before getting a superb exit onto the Wellington Straight and out dragging Cammish for fourth place. During his charge, Jake not only set the fastest lap - his fifth of the season - but broke the BTCC lap record, and scored an all-important extra point.

Moving up to second place in the Drivers' Championship, Jake now sits just five points away from championship leader Sutton and only two points ahead of third place Ingram heading to Brands Hatch (8 - 9 October) which looks set to be a thrilling finale to the BTCC campaign.

Jake's three wins and eight second-place finishes now sets a new personal record for Jake as the most podium finishes (11) across a BTCC campaign with three races still to contest.

Jake Hill, #24 ROKiT MB Motorsport:
“What a weekend! To come away 5 points behind the championship lead is just incredible. The ROKiT MB Motorsport and WSR team have been outstanding yet again, the car was faultless, and to have my engineer Craig still doing everything he could from his hospital bed was brilliant. Such a strong team. I'm so excited to get to my home race at Brands Hatch where we will be giving it our all to get this title!"

Mark Blundell, Sporting Director, MB Motorsport:
“Jake and the team were simply amazing this weekend. After the first practice session, we knew we had the pace to be battling at the front and Jake proved that with three laps times in qualifying that were all good enough for the front row. The WSR team did an amazing job all weekend, giving him a faultless car and jake returned the favour with some sublime driving. We set our goal as the championship title at the start of the season, now we head to the finale just five points shy of the lead - so we are fully focused on securing the championship!"